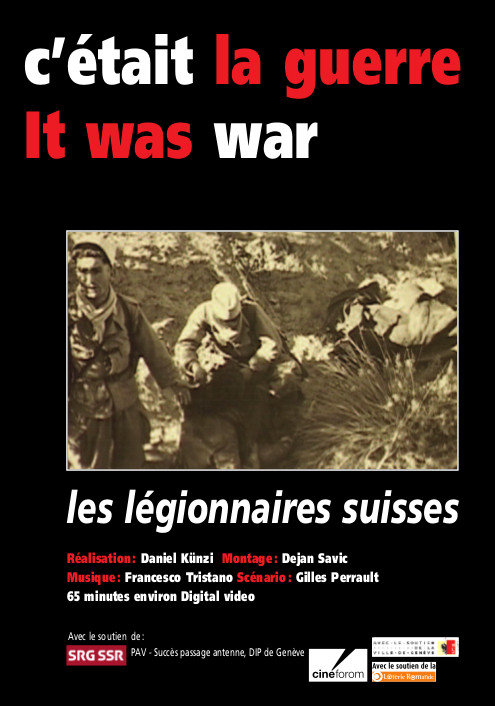 On one hand, the military says that one must not mistake the sound of a drum for that of a canon, on the other hand, those who have read Clausewitz won’t forget his remark: strategies are always one behind on a war.

Throughout my film work, I have looked into the First World War, the Spanish Civil War, the Second World War, the war in Indochina, then the one in Algeria, etc. Having directed interviews with eyewitnesses of these periods, I have been able to develop my own precise idea about the thing that is called « terror ». Here is an example taken from my next film that deals with Swiss mercenaries fighting in the French Foreign Legion, hired to do the « dirty work »

1) We were the ones that did the massacre with the FLN. They had an enormous number of dead. We had a massacre as well.

2) We could hear them. “The Legion, let’s get out of here.“ They knew we were hard. We rarely took any prisoners. Some of them lifted up their arms “Vive de Gaulle, vive la France. “ We pulled the trigger. That was the end of it.

3) It was very rare for an Arab to talk. You could torture them any way you wanted. For example the bath torture there was a big guy. They dunked his head in the water and counted one…twothree..four..five and then they lifted his head out of the water. The next time they counted until ten. The time after it was 30 seconds, then one minute. For me this was pure sadism.

Terror was everywhere in Algeria. During this conflict between 1954 and 1962, a quarter of a million Algerian lost their lives while the French lost ten times less. These eyewitness testimonies allow us to understand what terror is, in the same way as Pablo Picasso’ painting Guernica or Arnold Schoenberg’s music. A survivor from Warsaw. It is important not to confuse fear with terror.

We are close to Greece, a civilization that gave birth and nourished our philosophy. I think it would be useful to return to Plato and to the famous dialogue between Socrates and Meno. This can help us from getting lost when we speak about cyber terrorism. For the problem is to truly understand the meaning of this word.

If my understanding of the meaning of the word « cyber » as well as the meaning of the word « terrorism » is correct, then I must admit that their connection creates many difficulties for me. In the last ten years, the word « terrorism » has been adapted to any type of situation. To the point that an immanent Palestinian leader, Yasser Arafat, qualified in the past as a terrorist by the United States and by Israel, receives the Nobel Peace Prize. In the same way as Menahem Begin, who organized the terrorist attack on the King David Hotel in Palestine.

I have tried to find a convincing definition of cyber terrorism, but I have yet to find one. Certainly you will be able to help me out. For example, one often hears about attacks on Internet. But in my opinion, this is a case of malicious intent, a variant of the war on information, « intox » that appears during any war. But we are very far away from the devastating consequences of NATO’s bombing of Libyan television or the bombing of Serbian TV. I visited it’s building in Belgrade a few years ago. It was still destroyed, a monument to the 16 victims of the bombing.

Continuing my research, I tried to learn if there had previously been cyber terrorist attacks that had made as many victims as seen in the testimonies quoted above. : torture, massacre, etc. I found none. That does not exclude the possibility that tomorrow a group of terrorists, with the help of a « hacker » could take control of a nuclear reactor or say nuclear missiles in order to direct them towards cities that have been targeted.

In such a case, there is ways to prevent such an attack. The means exist and they are right there. In fact there is no doubt about the illegality of the nuclear bomb. The 1907 Hague Convention (articles 25 and 27, completed by article 24 of the 1923 Convention) forbids indiscriminate bombings of civilian populations. There are many other resolutions of the same kind, such as the criminal nature of the use of the nuclear bomb (the UN resolution 1653 XVI of Nov.24th 1961).

The conclusion is obvious. It is not a few potential cyber terrorists who are the problem. The real problem stems from a world that has been developed with total disregard for humanity as well as the respect for international legal norms, means that allow terror to be imagined on an apocalyptic scale.